After Christmas in Milwaukee, I headed to the suburbs of New York to see my husband’s family for a few days.  We played epic games of Set and Ticket to Ride and our new favorite board game, Urban Sprawl, and we were also able to take the train into NYC for a day with Ian’s youger sister, who met us at the Grolier Club to visit an exhibit on the history of typeface.  Garamond was invented in 1530! How cool is that?

After a delicious Korean lunch (at the very creatively named restaurant Korean Takeout), we walked to the United Nations and saw the Design for the Other 90% exhibit, curated by the Cooper Hewitt Museum.  I’m planning to do a more in-depth post on that exhibit, in which I have a professional interest – they displayed some very clever urban design for favelas and low-income neighborhoods plus some new low-cost building technologies and devices like a bicycle-powered phone charger.  If you’re not likely to make it to the UN, I would recommend looking at the cataloque; if you’re curious about the exhibit I’m planning to post a review of it next week, although it finishes Jan 9 so by that time the review will be useless. 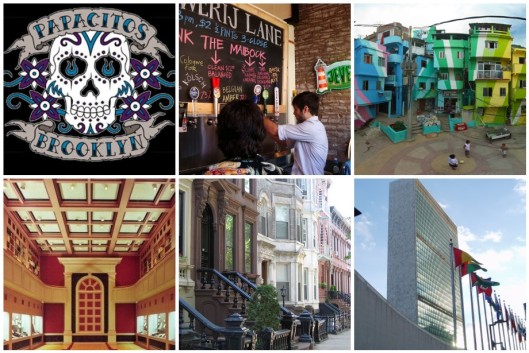 After our day ‘o’ tourism, we headed to Brooklyn, where we got a drink and Mexican with Ian’s sister and her boyfriend in their neighborhood (Greenpoint).  And then we headed back to the city, met up with some of Ian’s friends, and stayed there until the wee hours of the morning – thus concluding our Big Day in the Big City.

We’re in Boston now, and we’l be headed to Chicago in three days’ time (its going so fast!). Then we’re back to the Land of Engs for still more adventure…

***Please note: my pictures are trapped on my camera.  I didn’t take any of these photos; they came from all over the internet.

2 thoughts on “Big Day in the Big City”