Last weekend, after zumba (like I was going to miss gangnam style!), Ian and I headed into London to meet our friends Felix and Klara, who have been featured here before. Our initial plan had been to go to the Rain Room at the Barbican Gallery (which has also been featured on My Other Blog).

The idea of the rain room is amazing:

But the queue was not – two hours long, which is apparently pretty typical, because there are all sorts of warnings on the website (which I just visited, but did not look at before we got there).  So instead of hanging out at the Barbican with the hipsters for two hours, we went to dinner, which was the other raison d’etre of day.  We went to a place near the British Museum called Abeno, which serves obinomi-yaki, a Japanese omelette/pancake sort of thing.  We got four different kinds, including pork and kimchi; pork, squid and shrimp; a daily special with too many ingredients to recall, and one other.  We also got gyoza and a cucumber salad as appetizers and an apple-cinnamon-maple okinomi-yaki for dessert. 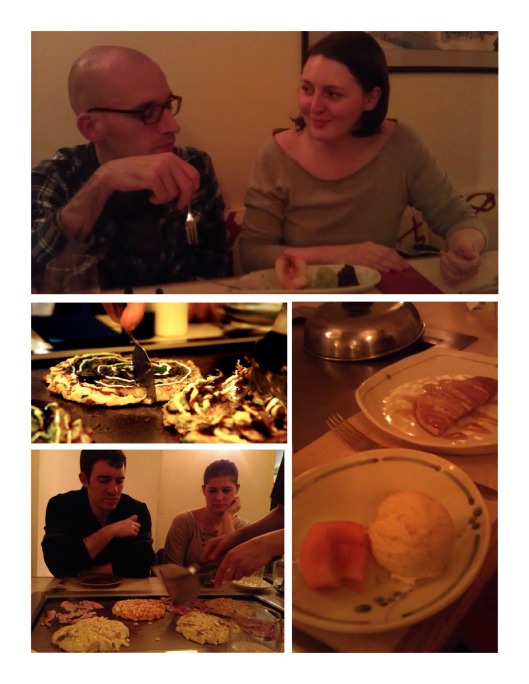 Holy crap, it was amazing.

It was a little weird to have your food make in front of you, because you feel weird carrying on your conversation with someone’s elbows between you (not to mention feeling rude to your server). Of course, it was also part of the appeal. Our waitress, Yoshe, was a Japanese girl with a clearly American accent.  Because I am my mother’s daughter, I asked where she was from, and she said Japan – but that her family had lived in Salt Lake City for 6 years.  When I asked what brought them there, she said they’d been Mormon (“yeah,” she shrugged, “it was kind of a part-time thing.” Naturally).

Also note: I have raccoon eyes in this photo because I went dancing on Friday and put goo-gobs of mascara on, and it somehow persisted the entire weekend.  This is serious stuff.