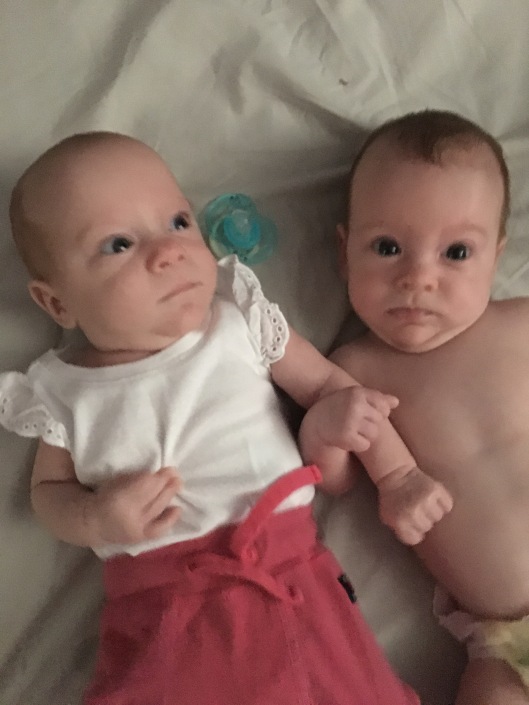 A couple days ago I was walking over the cycle bridge near the Cambridge Rail Station with both girls when I passed a lanky, heavily tattooed man in his early twenties talking on his mobile phone. As I went by I heard the words ‘they’ve got her on a ventilator, so she won’t have breathing problems when she’s older.’

A few meters past the man, I stopped and did an awkward two step, then turned around and interrupted him.

‘I’m so sorry to interrupt,’ I said. ‘Do you have premature babies?’

‘I do,’ he said, undoubtedly alarmed that he was now being accosted by suburban looking mummies.

‘These guys were 31 weekers,’ I said, eager to be helpful.

And this was the moment where I screwed up. I have the world’s worst poker face, and I knew my alarm and concern was washing over my face. ‘They’re doing well,’ he assured me, and I felt more like an asshole with each passing moment.

I’ve thought about that conversation a lot in the last couple days, for a couple reasons: first, I hope those babies are ok. I have thought about that guy, and his partner, sitting next to those babies’ incubators and watching the monitors the way I did. I have also thought about the ways in which I could have done better. Most of all, I wish I hadn’t put him in the position of having to reassure a stranger. That’s the thing I had dwelt on: I wanted to be helpful but I’m pretty sure I failed. But here is what I would have told him, had I done it right:

From the moment I found out, at about 16 weeks pregnant, that we were facing a particularly difficult pregnancy (even by twin standards) and that the girls would have a tough start, I hunted down success stories on th internet – and there are a surprising number, because the internet is a big place and people like to share happy stories. I joined Facebook groups, read memoirs and blogs, and even managed to talk to an incredibly kind mum of triplets, one of whom was born at 530 grams at 31 weeks and now, age 4, is cognitively just fine: bilingual and counting to 100. Someone told me yesterday about 22 weekers, now 3.5, who show no trace of prematurity.

I know, of course, that my case-study approach has limits. And I also know that my girls are still very much at risk, relative to the general population, of developmental and attention disorders. I relax a little with every passing development: Daphne started blowing raspberries a couple days ago, which hardly makes her a genius, but does seem to indicate that she’s learning and processing as she should. It’s a linguistic development.

Despite my own emotional post-NICU progress, I am still occasionally dismissive of people who had a more straightforward experience – when I encounter people who say ‘baby boy was FINALLY able to come home after two weeks in the NICU, ten days after his sister,’ my first visceral reaction is to blow a raspberry of my own. ‘You have no idea,’ I think – but of course, what do I know? A lot can happen in two weeks in the NICU.

So, to the Dad of Twenty Four Weekers: it is so hard, but you and your partner are not alone. You and I are reluctant members of a special tribe, the NICU Long-Termers. It is a larger group than I ever imagined before I became a part of it, and that is a good thing: we live in a world with many people born prematurely, who weighed less than a bag of sugar at birth but now lead rich, healthy lives: they are bike mechanics or cab drivers or Stevie Wonder, to name a few examples I came across shuttling back and forth to the hospital (I read about Stevie Wonder but I met the first two).

Someday soon, your premature baby will just be a baby, but in the meantime, I know something about what you’re going through, and it sucks, and I’m sorry. I hope your babies are okay, and I hope you are too.