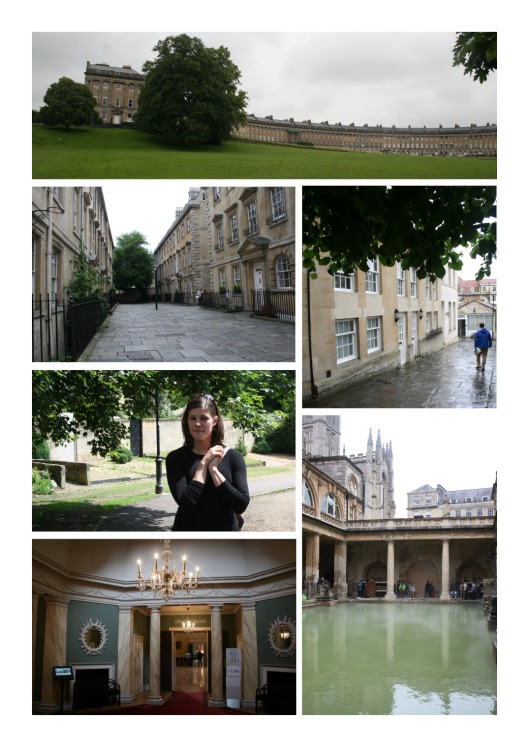 Ian and I are headed to Oxford this weekend after attending the Kings College Garden Party (because we’re fancy!).  I am super excited to visit my old stomping grounds – we’re going to hit up the Pitt Rivers Museum, Worcester College (alma mater!) and Ben’s Cookie Bar, because I’m obsessed with that place.  And maybe the botanic gardens and the Ashmolean.

We can really do a tourism blitzkrieg when we set our minds to it – which we proved in Bath.  We got in on Friday, and went to see School for Scandal (as I mentioned in a previous post).  On Saturday, after going to Jika Jika for breakfast, (a bar owned by rugby players) we hit up the Roman Baths (Bill Bryson has his own audio tour, which actually was a disappointment.  It wasn’t funny, although it wasn’t trying to be.  The actual informative audio tour was great.  Two hours (plus 30 minutes spend queuing) well spent.  After a leisurely morning, we went to The Circus for an amazing lunch, and then went to the Assembly Rooms, which also houses the Fashion Museum.  I was particularly excited because the Assembly Rooms are featured in Persuasion, which is possibly my favoritest favorite movie ever (there’s a photo in the montage above). It was so evocative of Jane Austen for me – even more than the Jane Austen Centre.

Sunday we hit of the Jane Austen Museum and then did a small tour of Bath crescents.  The Royal Crescent is the famous semi-circle (crescent) of Georgian buildings; they were actually built by the George who gave his name to Georgian buildings because he was the first monarch to get really into spas and taking the waters.  The crescent shape caught on, and there are a few of them scattered around the city. We were also able to work in more of the sets from Persuasion – there is a gravel path where Anne and Wentworth walk together (one of the only places they would have had any privacy, apparently – the picture of me was taken there, during the five minutes that it wasn’t raining); one of the less fashionable crescents where Anne’s family took rooms (it looks pretty down-at-heel today, to be honest).  And it turns out that our hotel was immediately adjacent to the place where Jane stayed on her first stay in Bath.  She wasn’t ever very happy in Bath – she grew up in the country – but as the setting of many scenes from her books, it still comes alive.  There’s Georgian stuff everywhere.  There’s plenty in Cambridge, but its a whole other thing in Bath.

The best part about the ramp-up to Bath is that Ian and I considered many potential destinations before settling on one, so we’ve got a backlog of fantasy holidays locked and loaded.  Bring on the adventure!

A friend recommended MWF Seeking BFF to me a while ago, and I pre-ordered the British paperback off Amazon immediately.  Its a book about a woman who follows her boyfriend (subsequently, her husband) to Chicago, a city where her social network is a little thin.  After a couple years, she realizes that she hasn’t found her go-to girl in Chicago: she has a social life, but no one she can call on a moment’s notice.

The friend recommended the book to me because, obviously, I am also in the process of finding a social life in Cambridge.  The author of MWF Seeking BFF goes on a friend-date once a week for a year – meeting friends of friends, going friend-speed-dating, at one point even hiring a friend for an afternoon – and reports back.  The good news is, after a year of working really hard to make friends, she calls it a success: she’s met lots of people she really likes, and some have become close friends.

Its not exactly literature, but MWF Seeking BFF is a solid read.  I didn’t love the whining she did at the beginning – “I don’t have anyone to get a pedicure with!” – but I empathized just the same.  And I took heart from the conclusion: almost everyone the author, Rachel Bertsche, met was open to new friendships and was pleased to be invited on a friend-date, even though not all of them became friends in the end.

The thing that I did wonder the whole time was, what had she been doing the previous two years of her life? I have spent six months in Cambridge frantically trolling for friends, and while I’m not popular, exactly, I’ve met some people on whom I can call in a crisis and who have lifetime-friend potential.  When I mentioned the book to My Friend Lauren, I said I didn’t think the experiment – 52 friend-dates in a year – would translate to Cambridge, because its too small and because so much of the social life centres on the university.  She said “and its so un-English” – which was an important factor that I hadn’t even considered.

For the most part, I’ve been pleasantly surprised by how friendly English people are, in defiance of cultural stereotypes.  Its been better than I was expecting – although when i said that to a Swiss friend, she said “What were you expecting?!”  We’ve made a commitment to being in the country for a long enough time that people are willing to commit to getting to know us.  And of course the advantage to living in a university town is that new people are always arriving, most of whom don’t have a pre-existing social network in the area.

That said, if anyone has suggestions for ways of making new friends, I do welcome suggestions…

I’m taking my first British getaway this weekend  – a climbing trip in Cornwall via Southampton – and I’m really excited to see some more of England, eat some pasties, and add to my very modest repertoire of outdoor climbing experience.  After ten days of absolutely gorgeous weather, I’m thinking about summer adventures, and I checked out two books from the library to get ready. 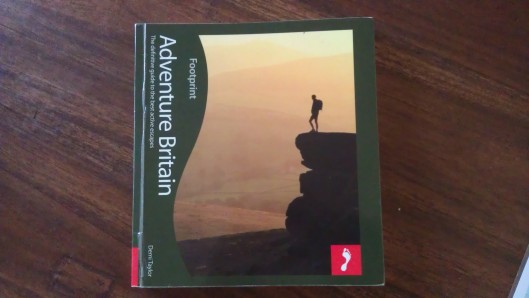 The first book, Adventure Britain, gives a summary of various adventures opportunities by region.  It lists hiking (“walking” in UK parlance), climbing, surfing, and mountain biking, which are fairly obvious activities to include.  It also lists parasailing (yes please) and wild swimming (really? that doesn’t seem that adventurous) and coasteering, which I’d never heard of but is basically cliff jumping and floating around in the ocean.  I was surprised that it didn’t include sailing or windsurfing.  It also had a couple opportunities for foraging, but didn’t include birdwatching, cross-country skiing, or any of a variety of other adventures I haven’t thought of.

Each activity listed is presented very cogently and comprehensively, with resources for more info plus nearby hotels and restaurants, and there are a whole lots of activities covered in the book (stand up paddle boarding, whitewater rafting, and paragliding, among others).  My biggest complaint, though, was the lack of maps.  There was not a single sodding map in the entire sodding book.  My biggest frustration with being in a new country is that I don’t have a mental map, and I hoped the book would help.  But no map! 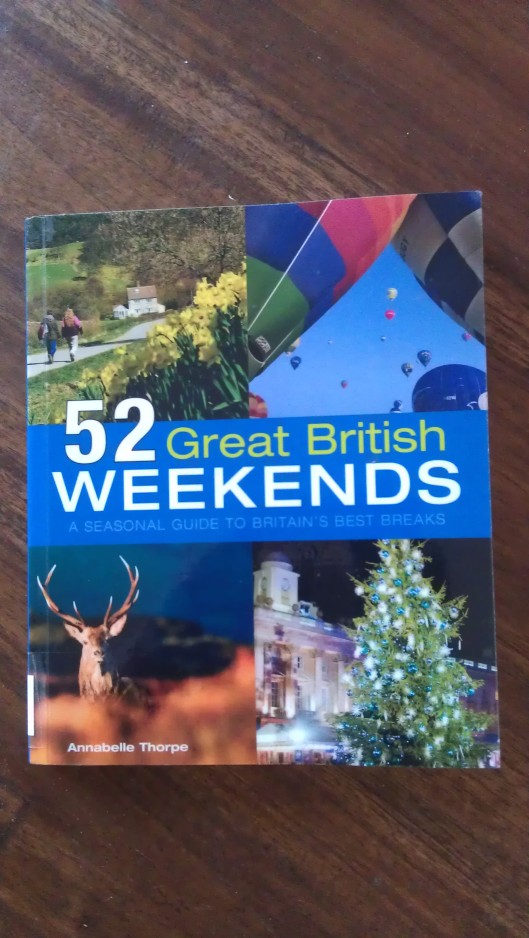 The next book, 52 Great British Weekends, takes a more sedate approach to adventure, but neatly breaks the weekends up seasonally.  Each season has a variety of activities – from walking to serious eating to amusement parks – and covers a variety of regions.  I learned some things about the country that I hadn’t known.  I now really want to go to the Hebrides, for example, and I learned that I live near some really great birdwatching.  But as with the previous book, it was seriously short of maps.  As in, there weren’t any.  I really wish they’d thought to include some, but instead I read both books and then had to spend some time googling to figure out where everything was.  That being said, I’ve included some mobile-phone pictures of the books below; both made me really excited to be in England and to have all this new stuff to explore. 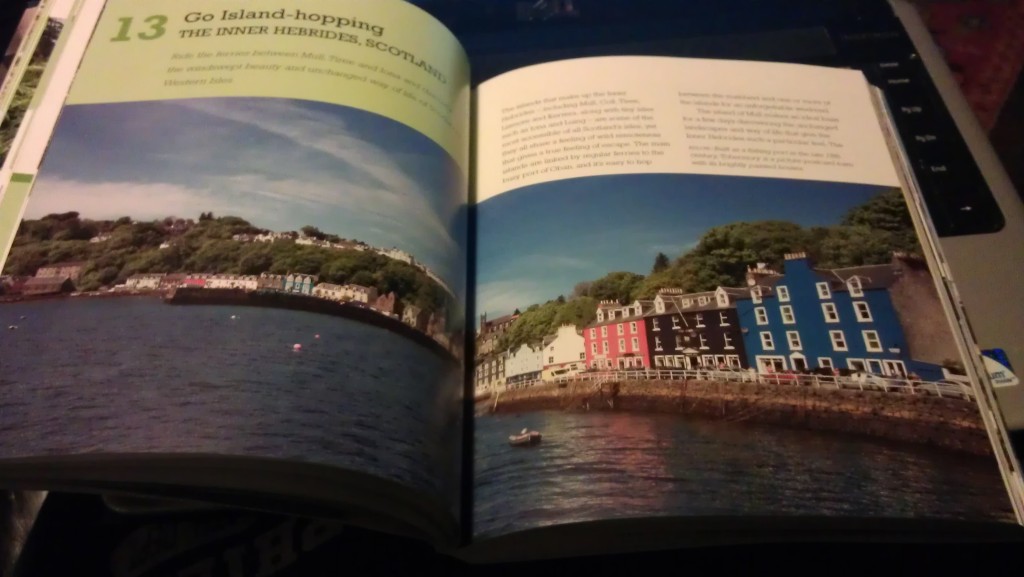 Hebrides: I want to go to there. 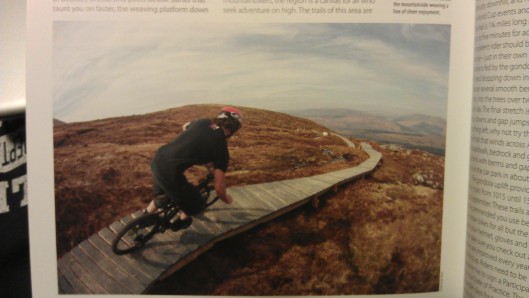 **Note: I’ve started a new series of Fantasy Holiday posts.  You can see them all by clicking the Category to the left. Wheee!

I am just home from the very first showing of “The Hunger Games.” I’m feeling a little overwhelmed.  I read the books a few months ago in a spree, barely sleeping and dreaming about The Hunger Games when I did.  My unbridled enthusiasm for the books (which I have been pushing on my friends like Jehovah’s Witnesses push bibles) meant that I was prepared to like the movie, but I was concerned that I would be let down or that the torrent of positive reviews would get my hopes up too high (I read them in spite of myself).

The movie is about a post-apocalyptic version of North America wherein 12 Districts send teenage “Tributes” to the Hunger Games every year, essentially to engage in gladiatorial combat for the entertainment of the decadent Capitol population, who watch it as the Ultimate Reality Show.

Jennifer Lawrence, as the heroine Katniss Everdeen, is just pretty badass. She’s alluring without being sexy, athletic without being ripped, brave without bravado.  Most importantly, Lawrence’s Katniss is believable as a teenager (a conflicted, furious, prematurely adult teenager – but still someone who feels fundamentally young).

Peeta is short, not the football-player build I imagined him to have, and his relationship with Katniss lost a lot of its nuance without her inner monologue, but he’s a cutie-pie. Gale isn’t given much to work with, but the trailer doesn’t do him justice: he is one fine specimen of young manhood and I sure did enjoy looking at him.  His relationship with Katniss becomes more important in the second book/movie, so hopefully he’s up to the task. Woody Harrelson as Haymitch was better than I expected, and Elizabeth Banks, who was my choice for Mama Everdeen, is a pretty awesome Effie Trinket.  Cinna = perfection.

The movie as a whole was pretty great.  My moviegoing companion cried when Katniss volunteered for the games and my heart was racing for pretty much the entire two hours.  The special effects are best deployed in the scenes in the Capitol; the Games scenes with lots of special effects have lots of quick cuts and shaky camerawork.  The quick cuts are partly to reduce on-screen violence without diminishing the importance of what’s happening.  But there are a couple places where it feels a little sloppy: Katniss’ relationship with Rue, another tribute, feels rushed, and all of the tributes felt a little thin.  Also, one of the scariest things about the Capital are their ability to produce Muttations – genetically-modified animals.  Their role in the books is central: mockingjays, a critical plot point in all three books, are glossed over in the movie.  And in the movie’s finale, the muttations, and the way in which the characters encounter them, don’t feel true to the spirit of the book at all – which is certainly not for lack of CGI.

Despite a few shortcomings, however, I’m already waiting for the second movie (if I could have just kept watching, I’d still be in the theater right now).  I think its worth reading and seeing – like Harry Potter, its a cultural phenomenon that is also vastly entertaining and worth the time.