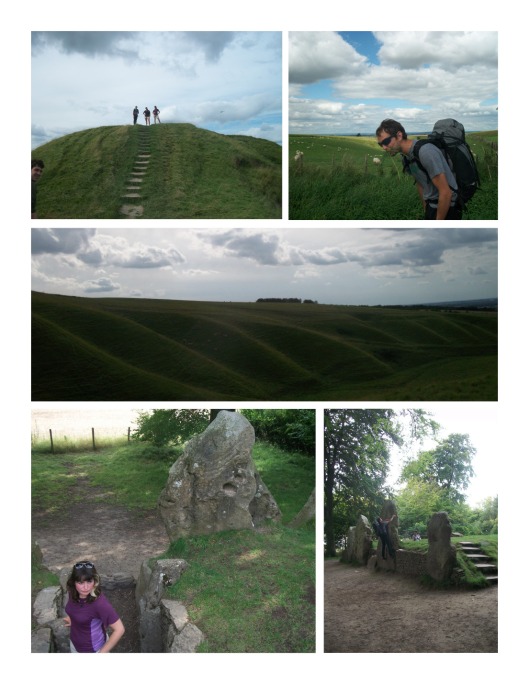 The Ridgeway Walk is an 87-mile trail across Southern England that begins at Avebury, a modest but very cool version of Stonehenge (or at least, a different set of giant stones in an even giant-er circle)  For My Friend Lauren’s birthday, we did 24 miles of the walk, beginning in Avebury, over two days.  It was a larger chunk of the walk than we thought we were doing  (day 1 was 11 miles instead of 6.6…oops) but the walk was beautiful.

The Ridgeway Walk is very cool for a few reasons:

2. Avebury, which is pretty famous

3. Hill forts! We walked through three hill forts and a burial site in two days

4. White Horse Hill, Uffington, a prehistoric sculpture of a horse wherein the land has been scraped away to reveal the chalk below. It’s awesome:

Of course when you’re standing next to the horse, you can’t really tell what it is, and its at the top of a hill, so you can’t really see it from below…but you can get a sense of the scale, which is very large.  Apparently if you stand in the eye of a white horse (there are several scattered across Wiltshire), its supposed to make you fertile.  My Friend Lauren said that and then followed it with “Don’t even think about it!”

Let’s not get ahead of ourselves, friends. 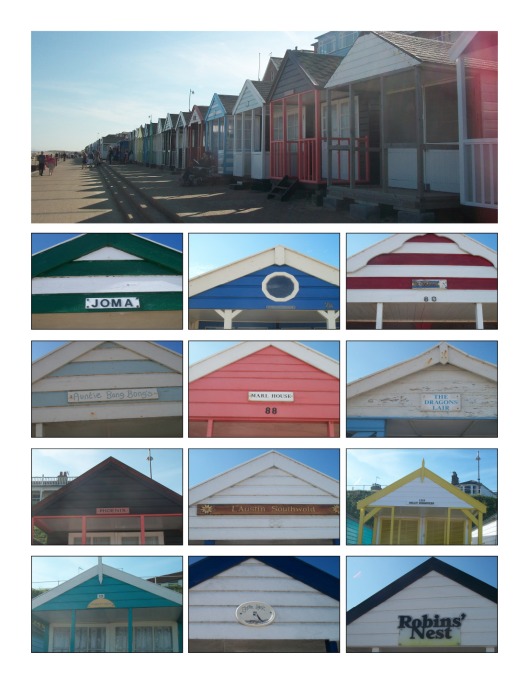 Southwold was both very typical and very idiosyncratic.  It was a purpose-built Victorian seaside town, and in that respect it was pretty similar to a lot of other seaside towns around Britain.  I was particularly charmed by the rows of beachfront changing cabins, but those are kind of iconic and certainly not unique to Southwold; if anything, I think they’re more often associated with the South coast, where the weather is warmer.

The thing that was totally specific to Southwold was the arcade.  There was a room at one end of the pier that resembled any old arcade: screaming children, screaming machines, epilepsy-inducing flashing lights.  That is not the arcade I’m talking about.  Further down the pier, there is a single room of homemade arcade games.  Actually, “games” might be overstating it – in one, you put a strand of hair in a small petri dish and then watch while it does a “DNA analysis” (for example, it confirms that you’re human, then gives you the likelihood that you’ll eat toast on the morning of 11 June 2038, and then says in 2142, its 98% sure you’ll be dead.  Spot on, I’d say).

Another game involves inflatable rubber gloves “patting you down” – Jaime tried that one.

The hands-down favorite was a really rickety looking photo booth – The Expressive Photo Booth, it was called (see below). The whole thing was made out of plywood. We sat down and moments later, the seat started rocking back and forth.  That was when the machine took the first photo.  Then there was a bright light.  Then a long pause.  Then the seat dropped out from under us (I screamed).  And a few moments later, we got our photo (top right) and I yelled “Let’s do it again!”

I would’ve kept going, too, but I don’t think Jaime was as into it as I was.

You can read more about Southwold’s special somethings, which include a brewery, a new housing development and a water clock, at my other blog. 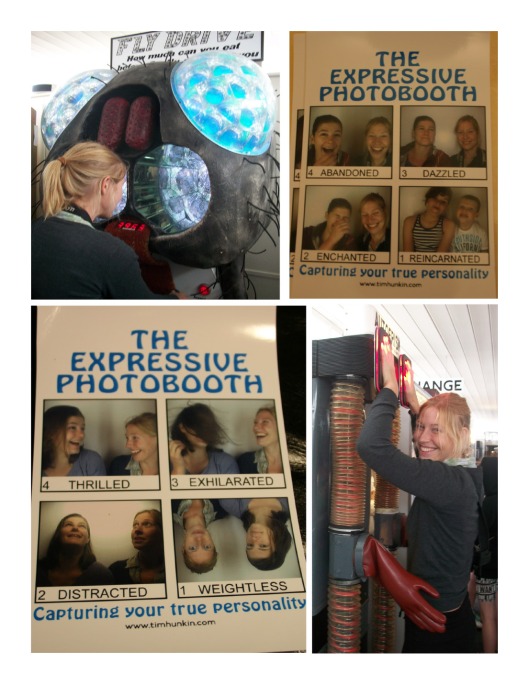 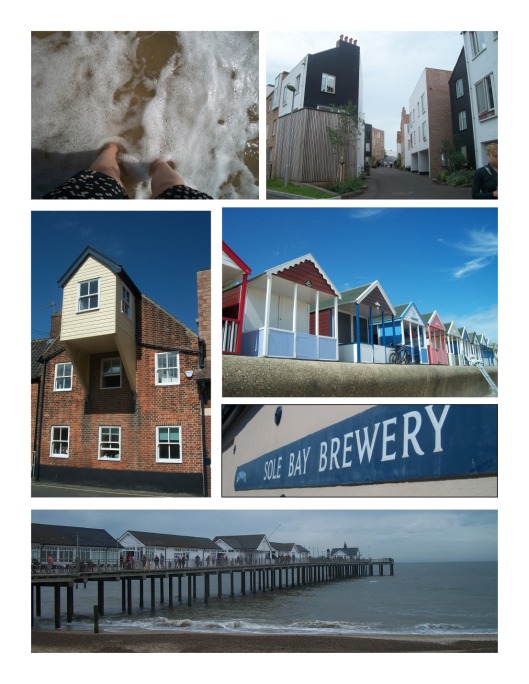 I’ve written about Tibby’s Triangle, an award-winning housing development in Southwold, on my other blog, (see upper-right corner of collage) but I also wanted to tell you about the rest of the town, which is utterly charming.  The beach is lined with those quintessentially British seaside huts, which apparently cost obscene amounts of money. There is a giant pier with a famous sculpture, a famous arcade, and some schlock.  I was absolutely charmed by the whole place.

It was wonderful to be there with another urban planner – Jaime and I camped a few miles away, and then had the better part of a day to spend in town.  We walked up and down the main drag, got a sub-par latte in a hilariously awful cafe, visited the Adnam’s shop (we meant to do the brewery tour, but we ran out of day); hung out in a playground and toured the housing development referenced above; went to the pier; took lots of photos; went swimming, and called it a day.

I had originally intended to take Jaime to Lavenham, a really sweet Suffolk town that I’ve mentioned on the blog before, but as we hopped back in the car, I turned to Jaime and gave her the options: we could go look at Lavenham – walk around the main drag of a very cute little town – OR we could race back to Cambridge with plenty of time to hit up the Waitrose on Trumpington Road, the yuppie supermarket that I’d never gone to because of my car-free situation.

Jaime intuited that I really, really wanted to hit up the yuppie grocery, and so that’s what we did.  For the results of the shopping trip, see below.

Our first day in Wales was a fantastic, sunny, perfect (if brisk) day, and I rallied the six of us to a strike out on an all-day hike – one leg of the Pembrokeshire Coast Path, or about 12 (surprisingly rigorous) miles from Newport to Fishguard. I would love to go back and do a larger chunk of it (minus the days that take you past the big industrial sections); I think it would be so fun to go from town to town along the Welsh coast, which is beautiful, and finish each night in a pub.

My walking companions were unfailingly good sports, although I think we all got a little more than we bargained for.  I have often earned the reputation for being a slave driver and its almost always unwarranted.  But in this case there’s at least a kernel of truth to it (but I mean seriously.  Look at that coastline! Look at it!) 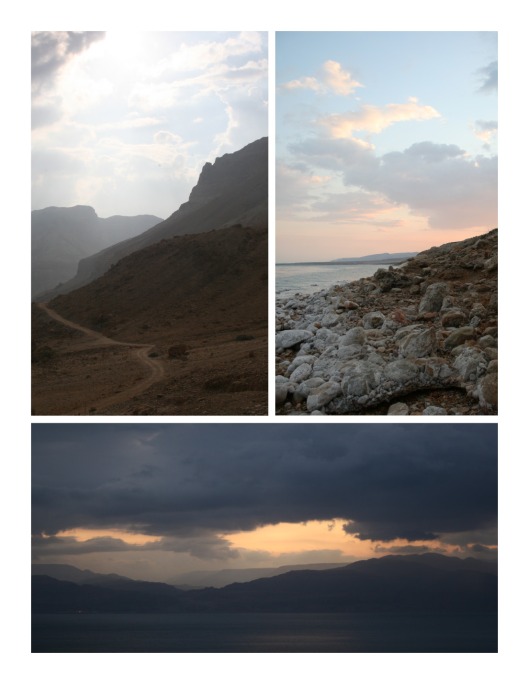 Because I’m lazy, I had this idea that I would post some of my favoritest favorite photos of the last year.  I’ve certainly taken enough pictures since leaving Other Cambridge. So I started looking at the best ones, and I realised all the photos I haven’t shared with the internet already are photos I’d taken in Israel last November. The ones here are all from our two days in the Dead Sea.  We went hiking in Ein Gedi Nature Reserve, bobbed up and down in the water (which is actually 1/3 suspended solids, fyi), got up early to watch the sunrise, and chased mountain goats around the hostel.  And worried a lot about food. There was no food there – I ended up getting most of my meals at the beach snack bar, but by “meals” I mean “tuna sandwiches” because in order to be kosher, they put a crapload of sandwiches in plastic wrap on Friday morning and called it a day.  It was run by a very friendly white guy with dreadlocks, though, whom we got to know pretty well over the course of the two days.  His English was way better than my Hebrew (I can say: yes, no, please don’t put it in a bag, and some swear words).

The absence of food at one of the most famous tourist destinations was mind-boggling.  But even so, Jaime and I made the most of the weekend.  Ein Gedi was a real highlight, with beautiful hikes and empty trails after the first flat mile.  We met other travelers at our hostel and chatted with them until late at night, and I saw 12 new species of birds.  We went to a kibbutz with a botanic garden (for two urban planners, one of whom used to be a landscape architect, this was Nerd Paradise) and went for walks in places with big signs that said “DO NOT GO HIKING HERE” – because of sinkholes from the shrinking of the Dead Sea.  The places that used to be underwater are still saturated in places and can form quicksand or just totally give way.  There is no local consensus about how likely that actually is to happen (I mean, clearly it does happen but how likely it is to happen to me was what I could never glean), which made me nervous – but I did live to tell the tale.  Jaime, the girl with whom I got into all these antics, is coming to visit next month.  I’m not sure what in England will measure up to dodging sinkholes in the Dead Sea, but I’m going to have to come up with something.

Ian and I had some adventures this weekend, so I’m looking forward to sharing our night at King’s College and our weekend in Oxford as soon as I can get off my bum long enough to find my camera.  Right now its a whole 2 rooms away.

A few months ago (in those heady days between turning in my thesis and graduating from my masters program), I watched a documentary on narwhals.  You may already know this, but narwhals are awesome. I was hooked – so hooked that I immediately hopped on the internet and looked up the price of narwhal-watching tours.

The prohibitive cost of the trip ($9000 for 10 days) ensures that it will remain  fantasy holiday.  But its so awesome! Its a cruise, basically, wherein you take a boat to the edge of the Arctic ice shelf.  You can go hiking and fishing and also expect to see narwhals, Orcas, bowhead whales, icebergs, probably some arctic birds….

In other words, its just really frickin’ cool.