Ian and I went to The Avery, a pub I’d never been to before, to watch the UEFA semifinal match between Italy and Germany.  We’d been to a different pub to watch a couple of the England games, and I have been in Europe during the World Cup before, and I watched the US-Japan Women’s World Cup final last summer, but none of that quite prepared me for the experience of The Avery last night.  The place was packed. 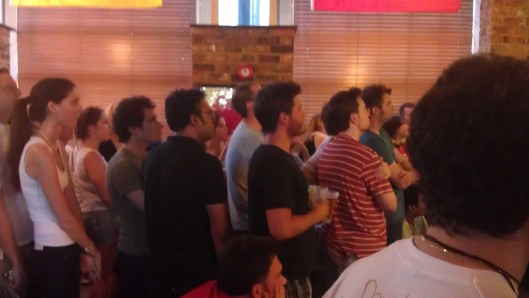 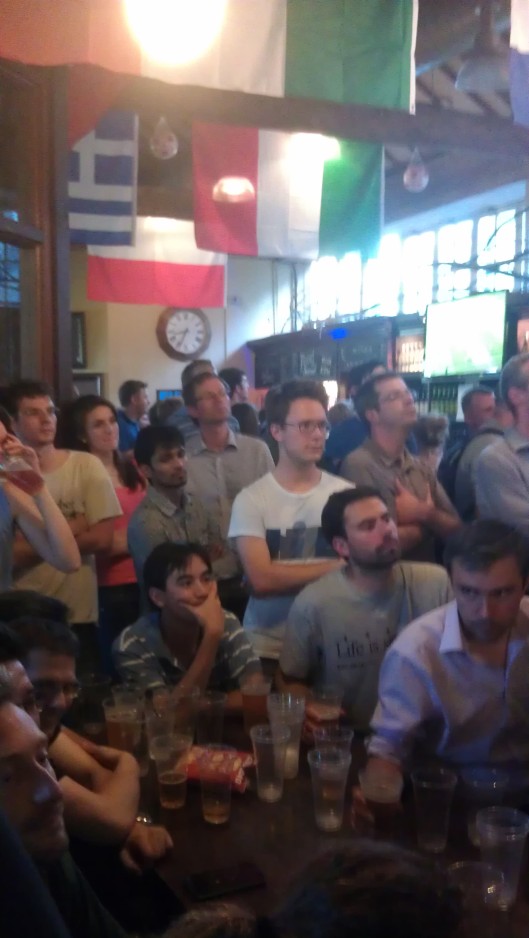 It was a really exciting game – in the second half in particular, Germany had about a bazillion chances to dig themselves out of an 0-2 hole, but decided to stop and pick their nose every time they got near the goal.  They also managed to botch half a dozen corner kicks, if not more, before finally scoring on a penalty kick in the second minute of stoppage time (and the crowd went wild).

The UK requires people to pay annual television licenses, so TV ownership is still pretty expensive (beyond just buying the set), and many people either don’t have one (relative to the US) or (maybe force of habit) elect to go to the pub to watch the game anyway.  Although there is lots of hand-wringing in England about the decline of pub culture, I think that the crowds at the football games are proof that the UK still really values its pubs as “third places” (between home and work).

The game also proved to me that Americans, even in England, haven’t grasped the European love of the game.  I arrived late, but I met up with people who had gotten to the pub an hour before the game started – and still hadn’t gotten a table.  During halftime, small groups of Americans kept trying to sit at the tables in my vicinity as if they hadn’t noticed the dozens of people standing around, apparently fully expecting that there would be seats available halfway through the game. Dumdums.

In the end, Italy won 2-1, and, despite the nail-biting finish, Germany wasn’t really in contention after about the 33rd minute (when the second goal was scored).  But the cultural experience was as much fun as anything else, and I’m pretty sure it was worth blowing off my yoga class to do it.