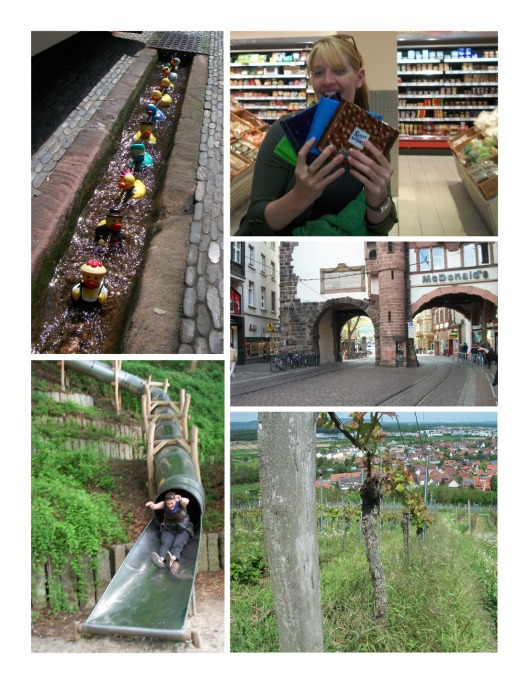 Freiburg is not a city that was on my radar at all – I’d never been to Germany before and figured when I did, I would probably go to Berlin.  But whilst traveling with My Friend Sarah, we did a nostalgia tour of Freiburg, where she studied abroad, and as a result I got the Insider Tour.  We wandered around the city and into a park with views of the city (we also found an AWESOME SLIDE; see above. I went down four times, although the first time my rip-stop trousers were too grippy and I ended up scootching down one bum cheek at a time.  After than I wrapped my fleece jacket around my waist and I flew down that thing, so much so that I almost face-planted at the bottom).

Anyway.  Here are some cool things about Freiburg:

1. The whole city has a system of tiny canals (ranging from 6 inches to a few feet wide) called bachle.  They are delightful.

2. There are vineyards all around the city.  Sarah and I took an easy walk along a creek that led us directly to public walking paths through the vineyards with panoramic views back toward the city.

4. There are mosaics in the sidewalk all over the city (images to follow on Wednesday)

5. There is a brand-new eco-village called Vauban that we strolled around for hours.  It was a major geek-out moment; I was so pleased to be there with another planner.  For my impressions, see my other blog.

6. It was way, way cheaper than Basel, and as a result I ate flammkuchen (thin-crust pizza) and drank Riesling to my heart’s content.