When Karin and I were in Amsterdam, we walked all over the city.  We admired the itty-bitty bike rails and the cobbled streets and the fact that many houses angled into the streets so that large objects could be hoisted up on pulleys.  We walked through the Red Light District and ate spekuloos and drank beer (see below).  But the most random thing that engaged our attention was the canal-dredger that we saw hauling debris out from underneath bridges: 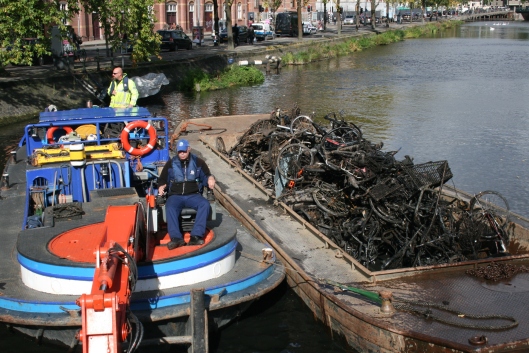 Basically, it was two barges, side by side.  One had a giant, arcade-style claw and the other had a huge (and growing) mound of dead bicycle frames that had been plucked from the canals. While we watched, the two slightly grizzled dudes working the claw pulled up six bikes and one old car tyre.  When the storage barge started to fill up with water, they tipped it to drain the same way you drain mineral water out of a tuna can, pushing down and squeezing until space had been created for more bikes.

We probably watched for 20 minutes.  It was awesome.